This summer David Mottershead, the founder and chief color expert of the Little Greene, English paint and wallpaper factory, visited Ukraine. Invited by the Manders company, he gave a series of fascinating workshops for architects and designers about the philosophy and practice of using color in interior. We were so impressed with what we heard and saw that decided to introduce David ’s main theses to our readers. Let ’s figure out why do we need multicomponence in shades, where the roots of popularity of certain interior colors lie, and why those who easily combine tones in their clothes do not always capable to choose the palette for their own living room.

Looking for the perfect color

I probably spent last 25 years of my life searching for the perfect colors. Of course, we have many beautiful colors in Little Greene and our second brand, Paint & Paper Library collections. What I realized very soon was that it’s not just about the color — but it’s about combination of colors. Putting colors together — this is what creates a really beautiful interior. 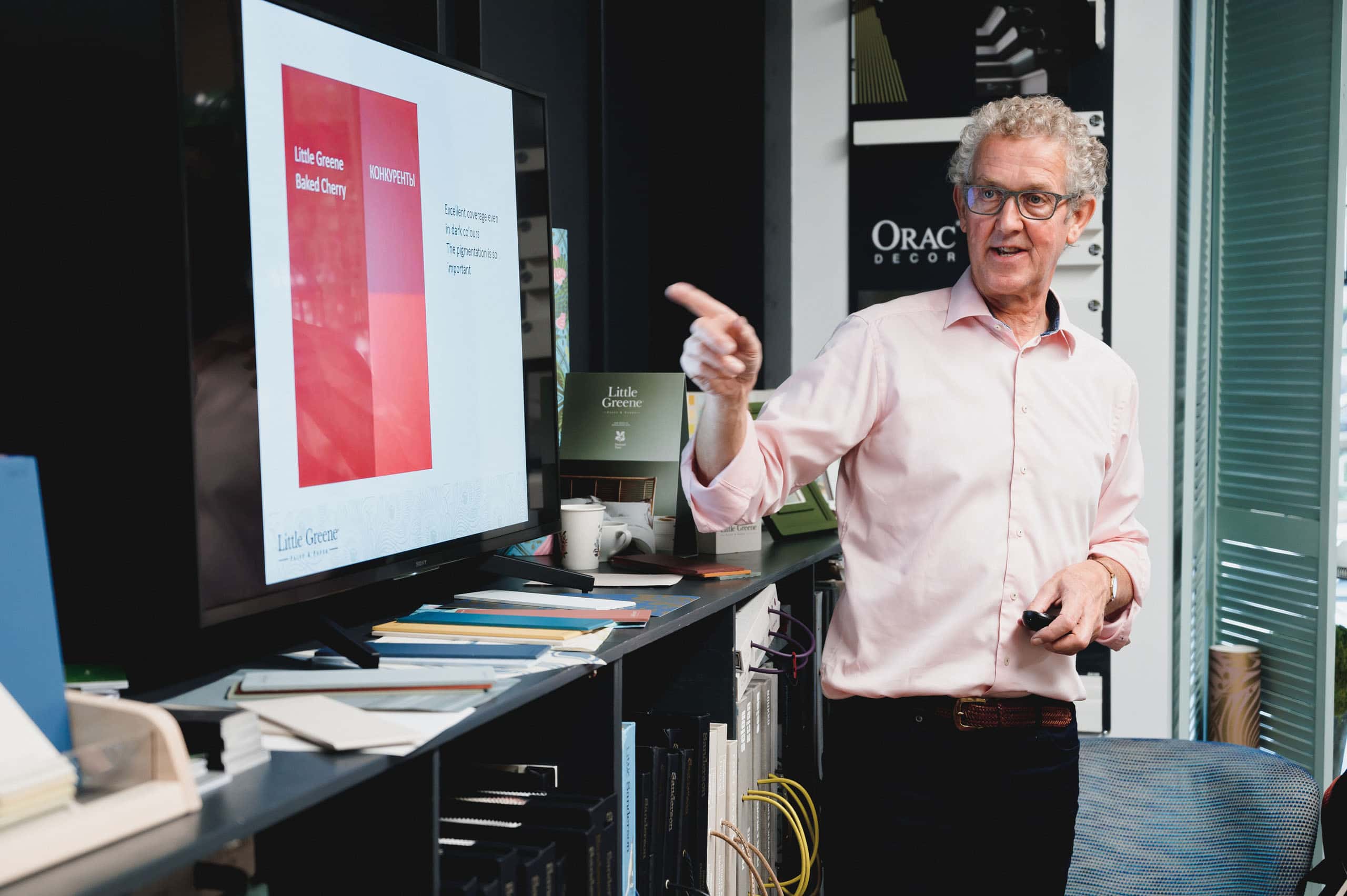 So I have to try to understand some logic when we put two colors together — we can say: «yes, it’s okay!». Why can we do this. At first I was trained as a chemist, and later I became someone else: my career became a mix of art, color and chemical science.

(Looking for a favorite shade — Approx. Ed.) This color is really popular among our customers — interior designers. It is a color Celestial Blue. It’s a historical color from research in old houses in UK. We wanted to create this color to be perfectly the same as the color that appeared 200 years before. We had to formulate it in a very complex way. 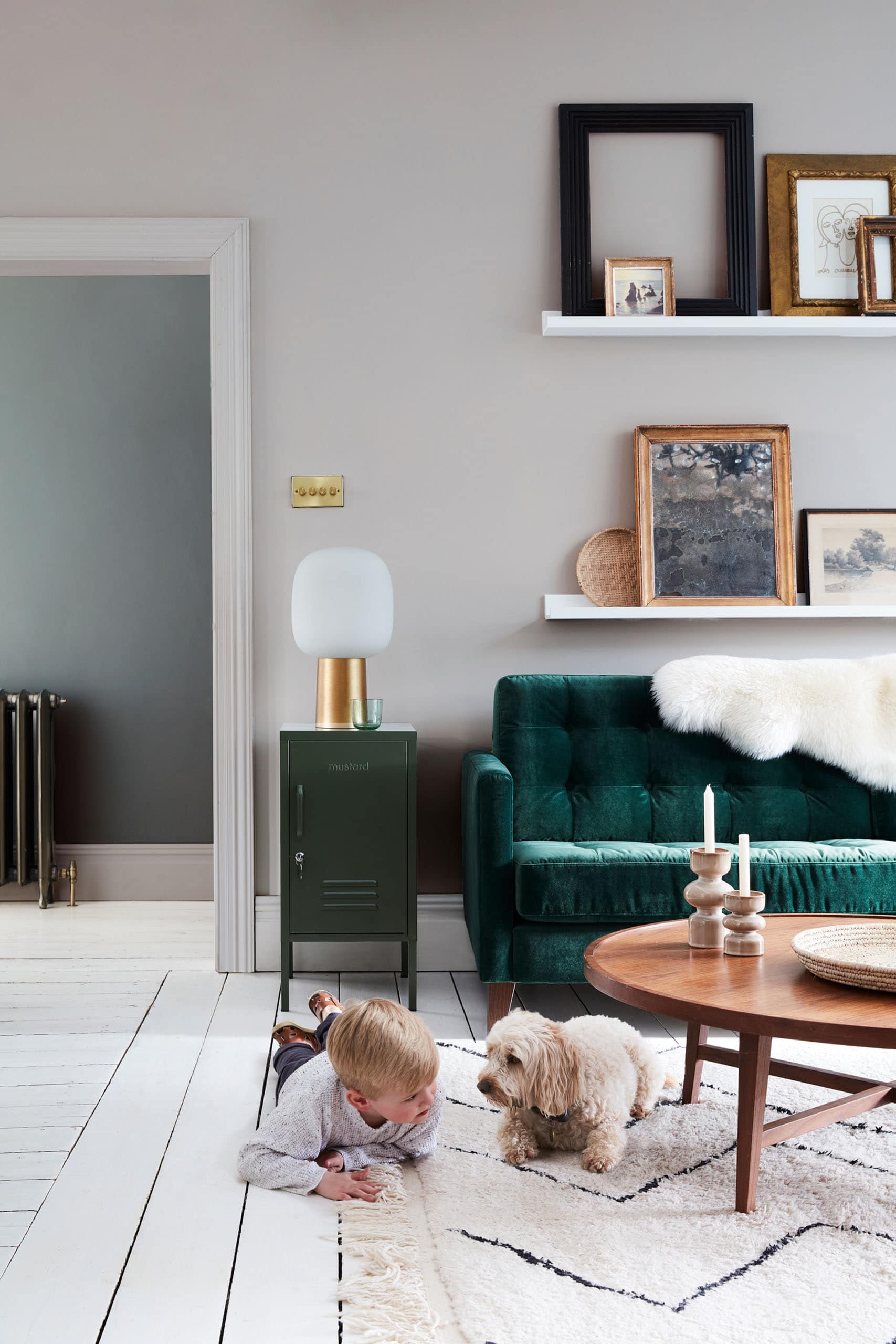 Maybe you were taught at school, that you can make any color with three or four main colors. It’s like printing. Of course, you know that it is not true, because in printed document and representation on the screen the colors are never the same. They are always somehow different. To make this color perfect we have to put inside seven different pigments: inside we have some red, green, yellow, of course, white and umber. We found that it creates a very strong relation between this color and many different colors, especially those we have inside: Celestial Blue is easy to combine with them. You can make a color similar to Celestial Blue just with a three pigments. But if you do this, the relationship with other colors will be significant in reduce.

Putting colors together — this is what creates a really beautiful interior

Work on this color gave us knowledge and understanding about making all other colors. We discovered really quite new things that we didn’t understand before. Since then we have been using the technology to create the bulk of the Little Greene collection and all Paint & Paper Library products. It is with such an integrated approach that our factory is different from others. As far as I know, only one other company in the world — the Thomas Newman Company from New York — uses the same compound method — all the others work on three basic pigments. 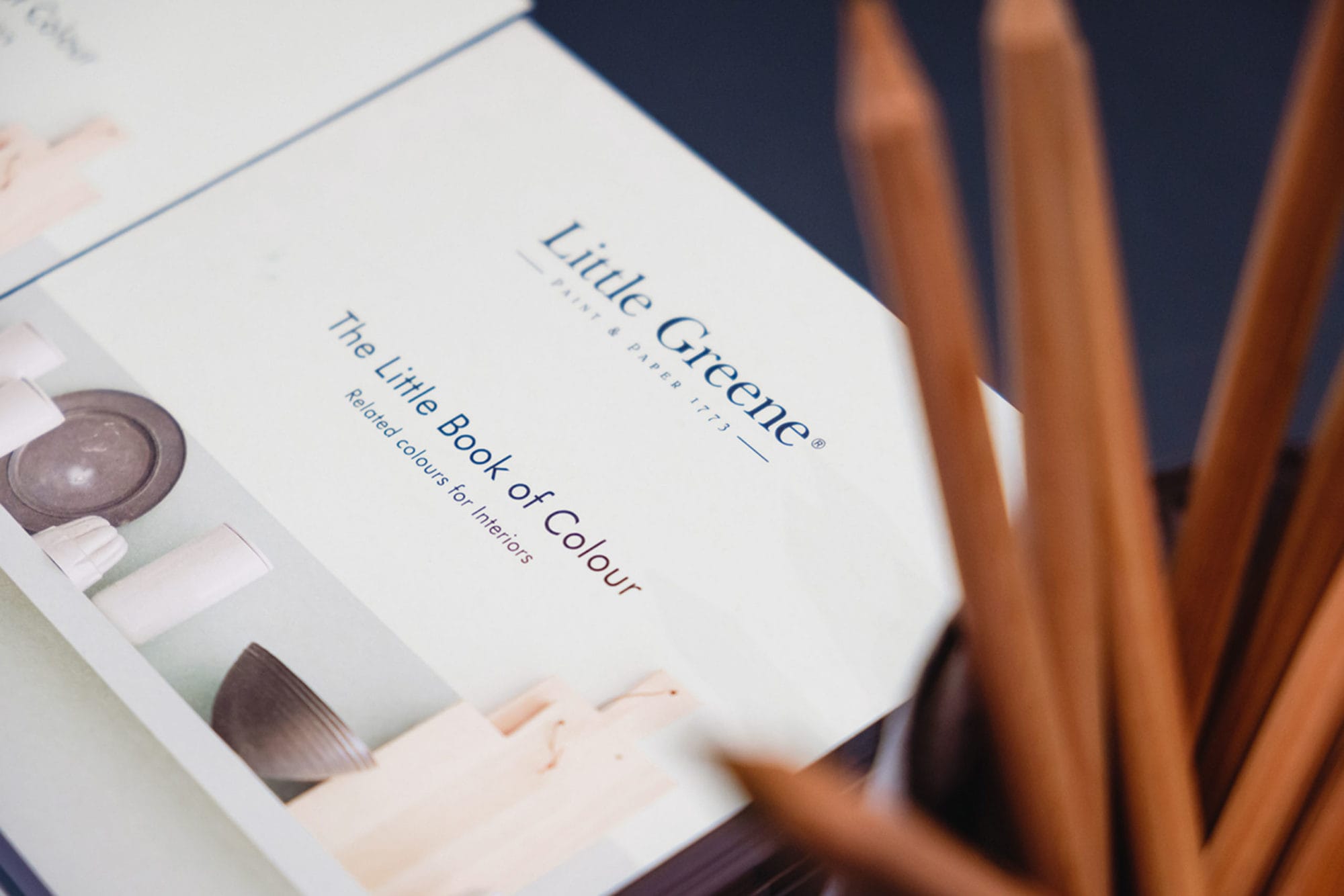 We need to understand the importance of pigments quality. Chemists, for example, know that red is made by combining three key components. If you take cheap raw materials, then two years after application such a paint will turn pink, in addition, its hiding power is such that it will take four layers to paint the surface, while with Little Greene you need only two, due to the use of the most expensive pigments for reasons of the best quality. Their price is six times bigger than the cost of cheap analogues. It would seem that you can save, but a simple mathematical calculation shows that the choice in favor of expensive paints is more profitable. By the way, in this red paint (name) we use the same pigment as Ferrari for their cars.

The importance of being harmonious

I’ll tell you a little bit about the Little Greene palettes. From a commercial point of view, its most important part is the far right, where shades of white are collected. A collection of dark tones contains a little black or umber. In the middle part of the folding palette you see bright saturated colors. 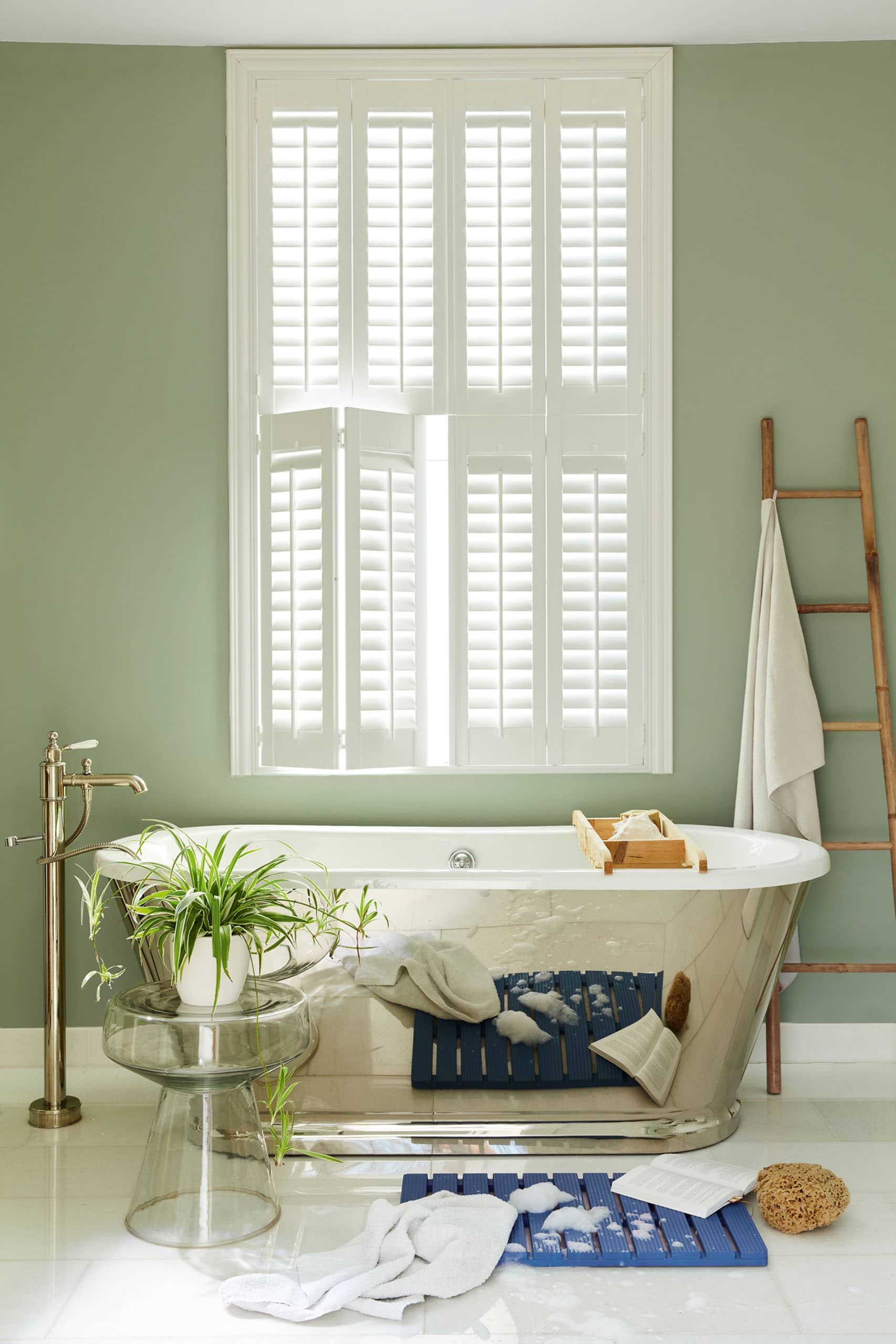 Little Greene’s paints can be used in high humid rooms, for example in bathrooms. Boringdon Green 295
by Little Greene

If your client has magnificent works of art, beautiful furniture and you need to create an appropriate background — take these tones. (Indicates the extreme right side of the Little Greene color layout, where shades of white are collected — Ed.). Especially if the owner is not inclined to experiment. If the customer nevertheless chooses a dark color, then you can use this part of the palette to create harmonious combinations. Since all the shades here are interconnected, hundreds of different combinations will work. All colors here are created on the same principle as my favorite Celestial Blue from seven pigments (their number in paints can reach up to nine).

Thanks to a special formula, we build these «genetic bonds» between colors

Let’s move on to the Paint & Paper Library palette. We decided to build its structure according to completely different principle. For example, our client chooses a certain color — a specific rectangle in the layout — and here we tell him that the entire column in which it is located is perfectly combined with each other, since the shades in it are interconnected and similar to each other. This is like members of the same family, like brothers and sisters; and the colors in the neighboring columns, say, like uncles and grandfathers. Thanks to a special formula, we build these «genetic bonds» between them. 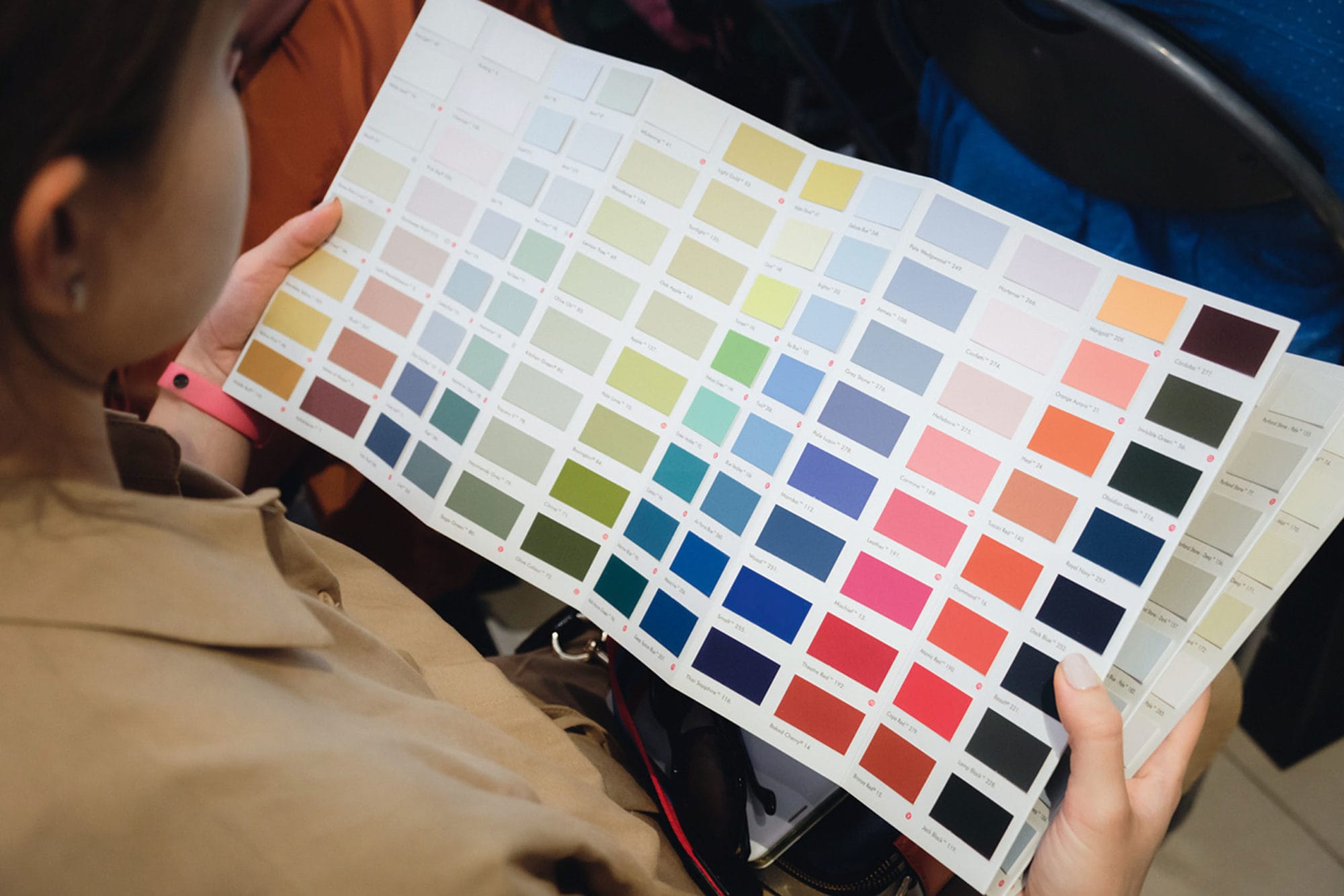 About 70—80 % of our paints are made on the basis of natural pigments. But I’m mature enough to remember the cultural revolution of the 60s. It is impossible to create such colors without synthetic, chemical dyes. In the first half of the 20th century, the development of such pigments was carried out in Germany and Great Britain. Those technologies along with the industrial production of new types of plastic made the pop revolution of the 60s. Now only a few companies produce such dyes and this is a well-controlled process, including from environmental safety point of view. If someone tells you that he produces such a bright red paint using natural pigment — this will not be true. This natural pigment was discovered in Italy, but in order to mine it you will have to dig and destroy the whole ecosystem, and from the point of view of European law, no one will allow this. 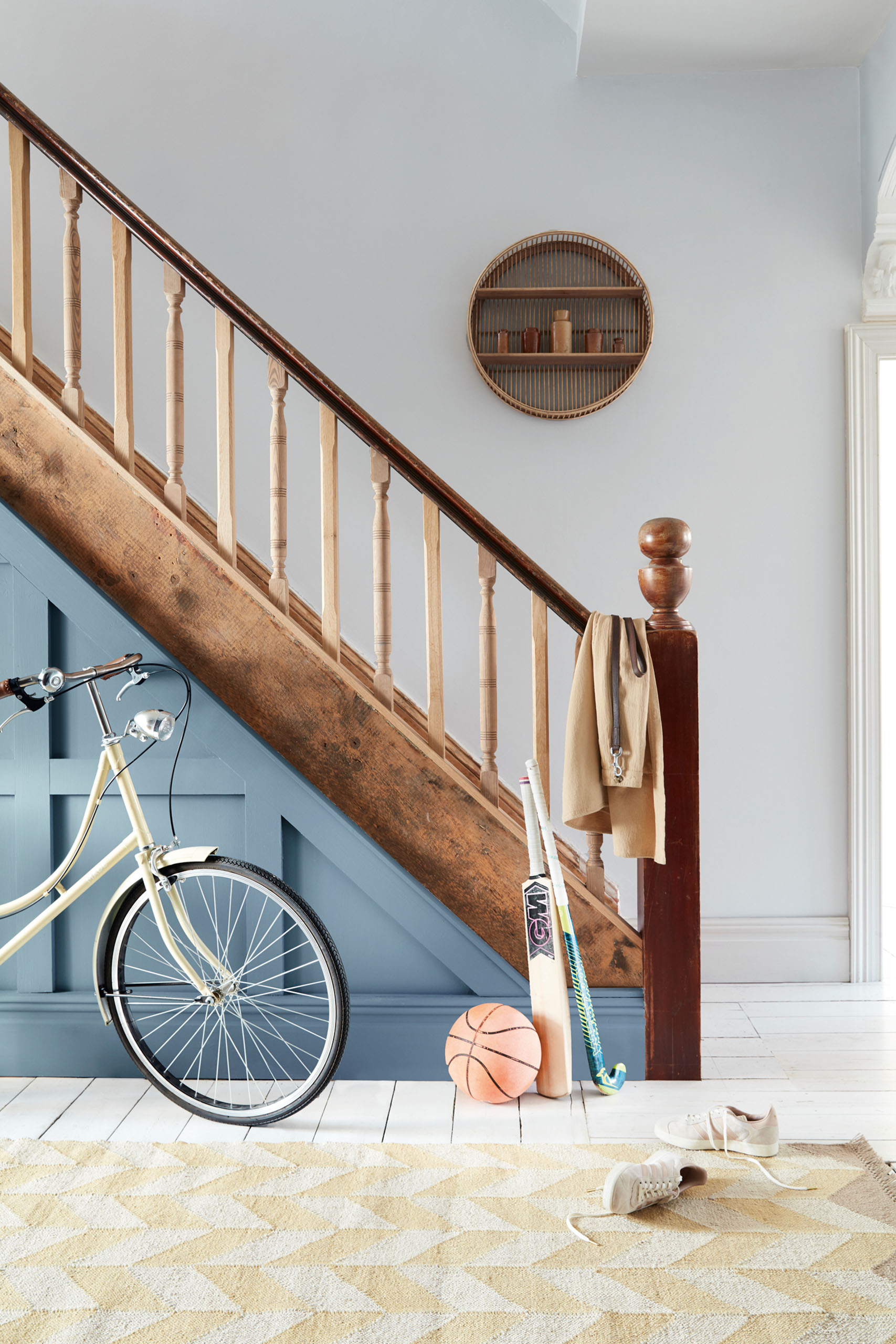 The red colors that you see now are based on the most common pigment on Earth — iron. We know that under the influence of the external environment it becomes rusted and oxidized. By exposing the iron to oxygen under different conditions, we can achieve all of these shades. This is the easiest way we use to create our colors. In addition, this metal is not toxic and is even prescribed for pregnant women. To my opinion, this approach is also environmentally friendly, since it does not require the destruction of beauty of any country.

So, Little Greene always pays attention to the historical decoration of the ancient palaces and residences of our dukes, kings and queens — it was invariably as rich as possible. Like the colors of our palette, many noble families of those times were interconnected, often had family ties with other well-known European houses and often competed with each other. 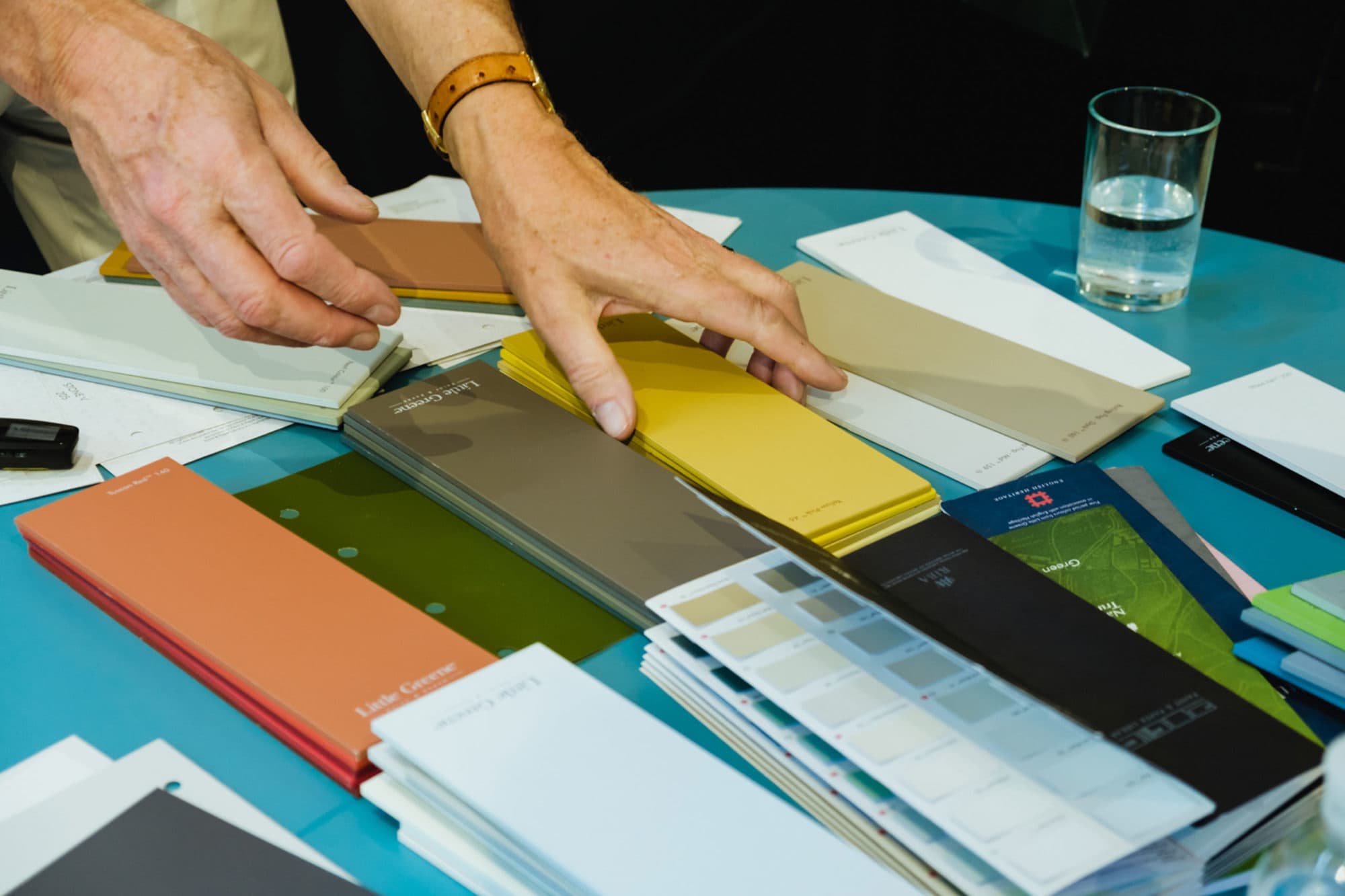 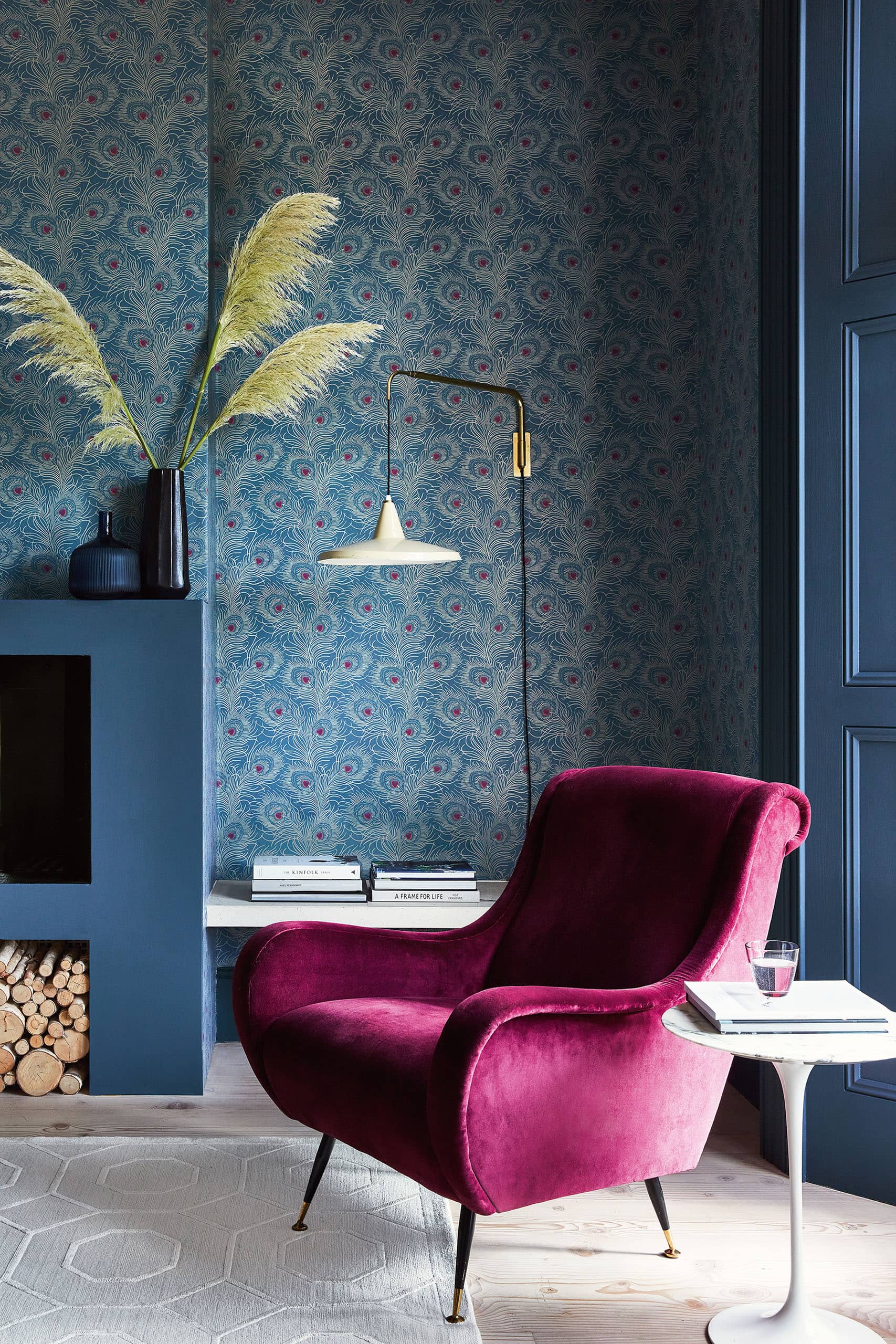 With the development of the chemical industry more and more colors appear in the interiors of such houses. The colors chosen by their owners were symbolic for that historical period. Knowing, let’s say, that Prussian blue was invented in 1704, then having discovered it in some old room, you can first determine approximately when it was decorated. This is part of our research. When we get to such an object, we usually take a small sample of the finish for study, and it happens that up to forty (!) layers of paint are found in it. And today, thanks to modern technologies, for example, mass spectrometry, we are able to determine the pigmentation of each layer.

What is happening now, in the 21st century? From my point of view, 25 years ago everything around was beige. The idea to change things came in Flanders: they began to use dark colors along with gray and white. The influence of this trend has intensified, with the help of Little Greene as well. For example, we developed such a range of gray shades (shows) to help people navigate the nuances of gray. Then there was a misconception that there is only one gray — a mixture of white and black. Following the principle of complexity described above, we developed a compound formula for gray inks: for example, shades of Blue Gray, Green Gray, Brown Gray and Pink Gray appeared. Gradually, gray became popular, and today its place was taken by white.

Many people think that white is just white and that’s it. But it also has shades 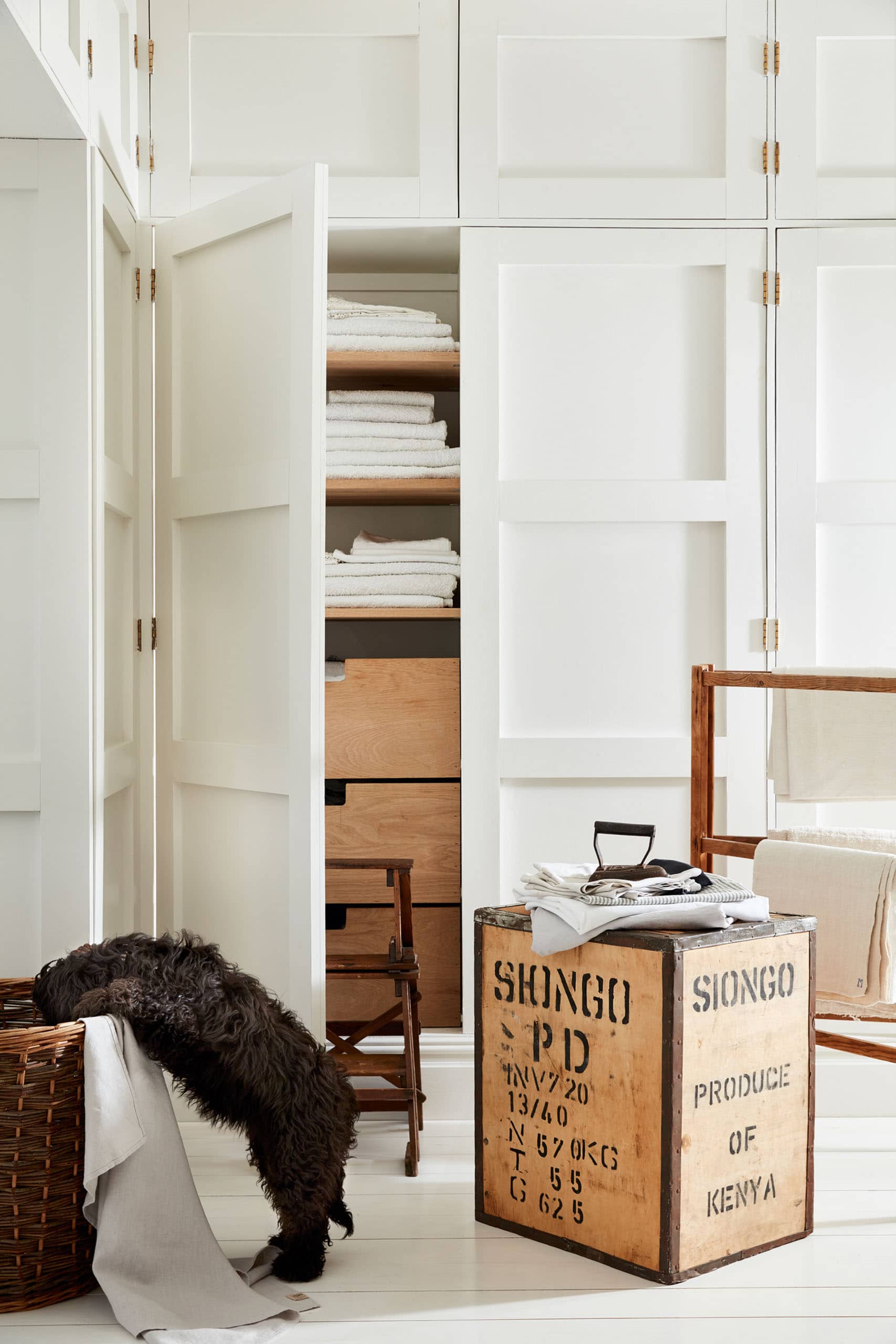 Many people think that white is just white and that’s it. But it also has shades. Striving to be closer to our customers, we are always focused on what they want. For example, interior designers are often asked by customers to paint ceiling in white. And here it is worth explaining what cheap white paint is: chalk divorced with water. But it turns out that it is not white at all and then blue is added to it to correct the situation. If you cover a ceiling with it, everyone who comes into the house will look at it now and then: the blue pigment unconsciously attracts the eye. 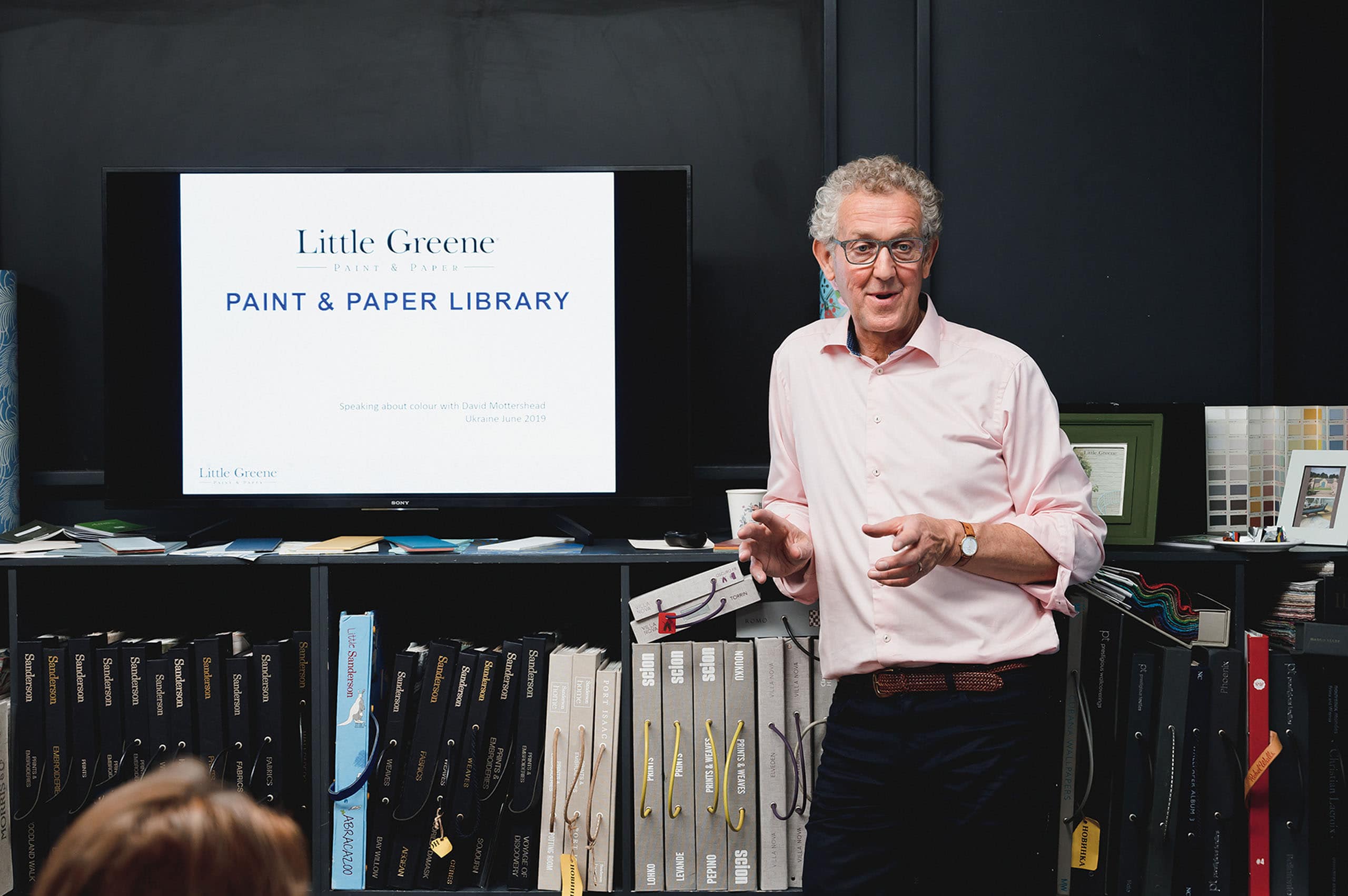 Another problem — white in combination with other colors may seem dirty. My advice is: if you have chosen a color for the walls, do not stop and continue it on the ceiling. Yes, it can be one, but of different saturation. The same technique can be used when creating the background for art objects and works of art. I also note that we subconsciously like colors that our parents used, and they, in turn, chose the ones that they saw in their parents’ house and this historical continuity is transmitted in such a way. 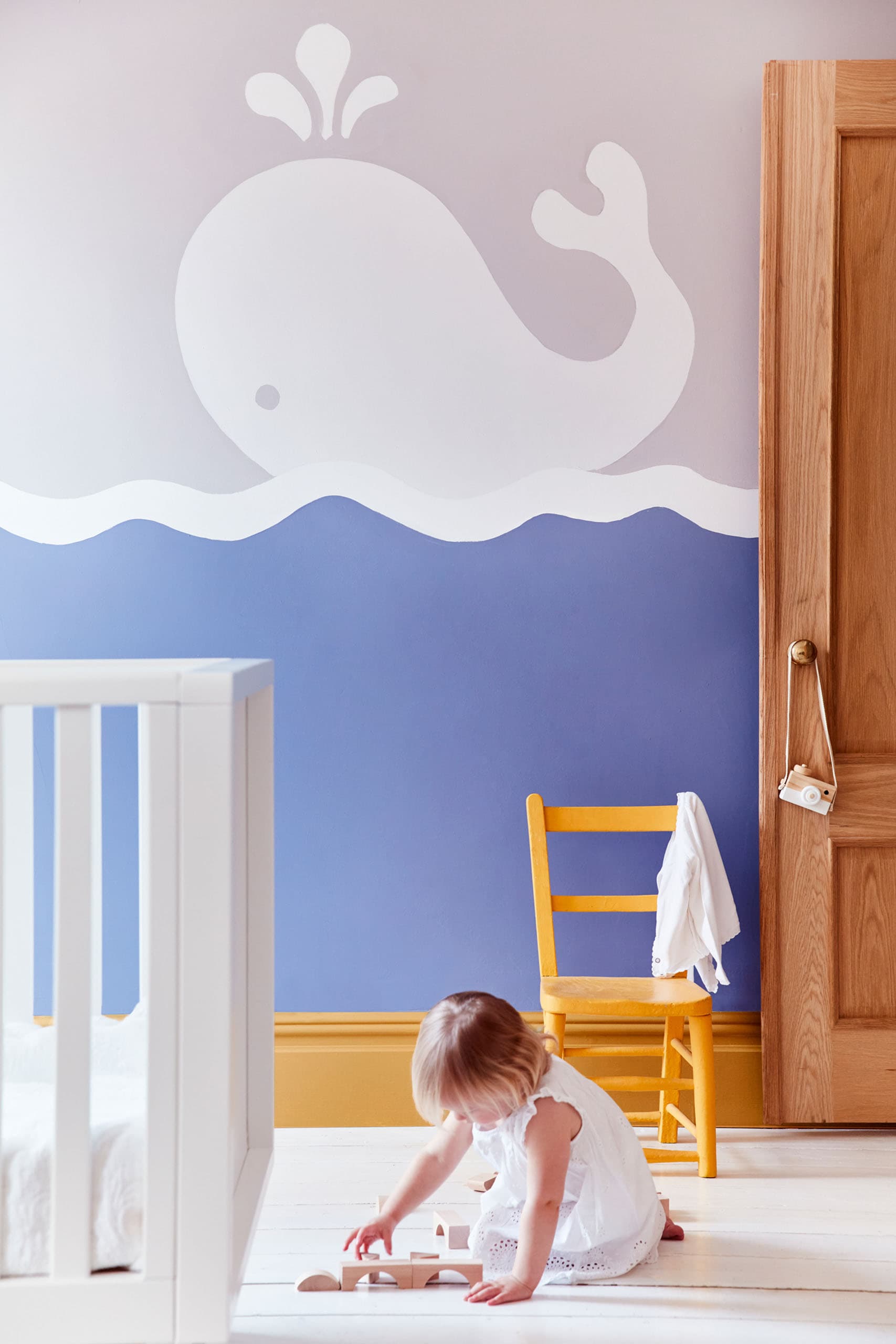 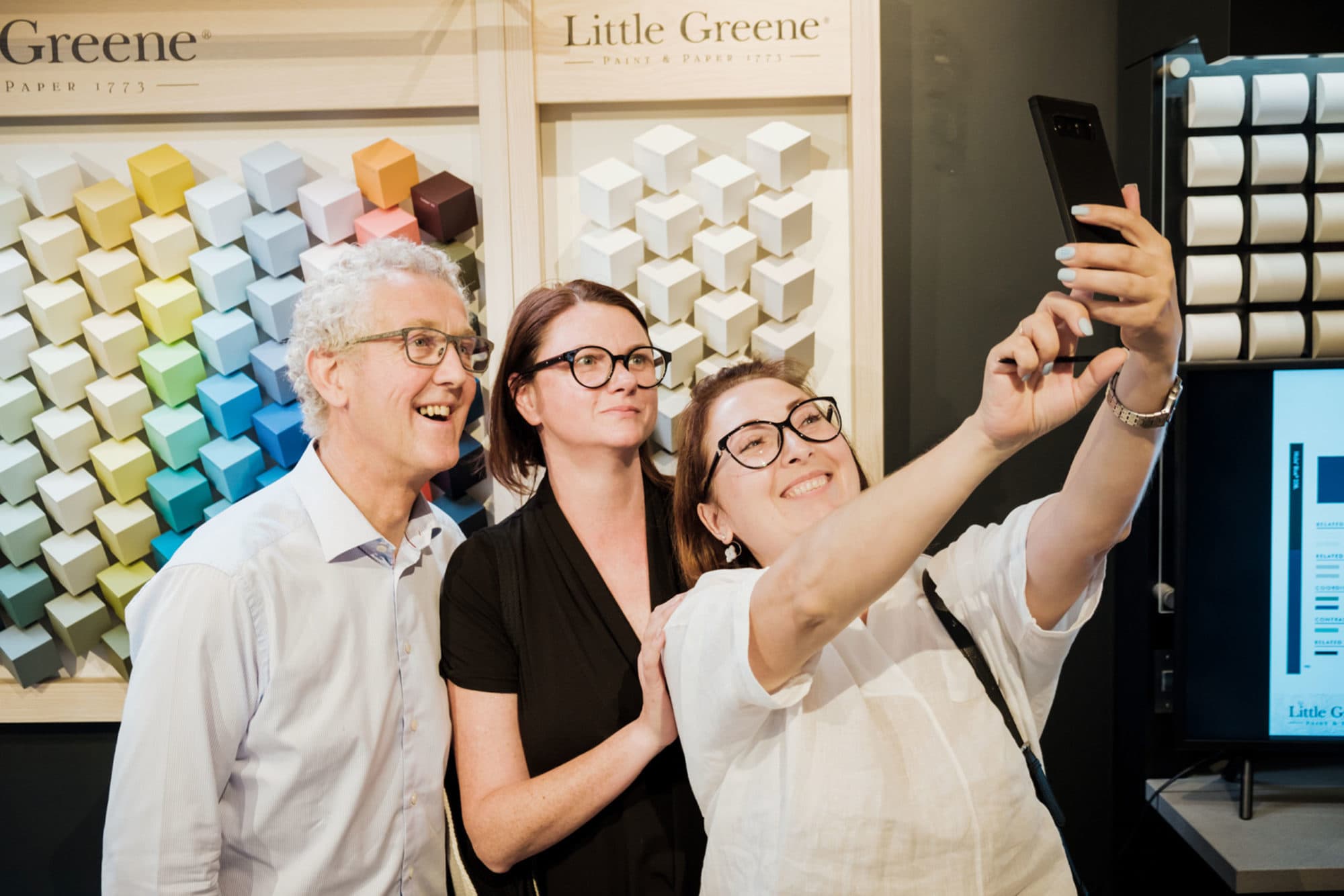 David Mottershead, Aliona Sydorenko and Anna Berdichevskaya during the master class at Manders showroom in Odessa

I always ask designers a question: «Why do your clients hire you? Each of them knows how to dress, pick up colors in clothes. Why do they need you?» My version is to give them official permission to use this or that color in the interior. After all, the mistake in choosing the color of the outfit is easy to fix by returning it to the closet, but if you painted the kitchen in an unfortunate shade, then your friends and relatives may consider you a fool.

And Russian version of this article you can find here.